Chiyoda Corporation, together with Mitsubishi Corporation, Mitsui & Co. Ltd. and NYK Line, the other members of the Advanced Hydrogen Energy chain Association for technology Development (AHEAD), successfully completed the world’s first global hydrogen supply chain system on 25 December 2020. The demonstration project, launched in 2015, was conducted by AHEAD and subsidized by the New Energy and Industrial Technology Development Organization (NEDO).

The hydrogen supply chain, which maximizes the use of existing infrastructure and meets international safety standards, commences with the procurement of hydrogen in the source country, overseas transportation to consuming countries in the form of methylcyclohexane (MCH)* and distribution using Chiyoda’s SPERA Hydrogen® technology.

By transporting and storing over 100 tons of hydrogen over ten (10) months, the demonstration verified that the system, an example of Japanese environmental technology, is technically ready for commercial use and confirmed SPERA Hydrogen’s potential contribution to global carbon neutrality in 2050. Chiyoda will now expand the system towards semi commercialization by the mid-2020’s, reducing costs through ‘economies of scale’ in line with increased hydrogen demand.

*Methylcyclohexane (MCH):
A liquid produced from toluene and hydrogen, which can be handled in a liquid state at ambient temperature and pressure. It is widely used in many fields and products, a solvent for correction fluids is one of the examples.

Realization of the use of hydrogen is globally anticipated as the ultimate clean energy carrier. While the conventional technologies did not allow a large-scale storage and transportation of hydrogen same as that of petroleum and natural gas, Chiyoda successfully developed a technology named SPERA Hydrogen®, to enable safe, large-scale storage and transportation of hydrogen. With this technology, hydrogen can be handled in a liquid state at ambient temperature and pressure, which makes it possible to utilize the existing petroleum transportation and distribution infrastructure, such as tanks, oil tankers and tank lorries, lowering the capital investment for hydrogen transportation.

The central objective of the Paris Agreement, entered into force in November, 2016, sets out a global framework to avoid significant climate change, to hold global average temperature increase to “well below 2°C above preindustrial levels and pursuing efforts to limit the temperature increase to 1.5°C above pre-industrial levels.” The Japanese Cabinet has approved that it will boldly take measures towards the reduction of greenhouse gases emissions by 80% by 2050.
In order to achieve these goals, widespread use of renewable energy is essential. Although renewable energy is unstable and/or highly dependent on the weather, SPERA Hydrogen® can be produced from renewable resources for storage and transportation as hydrogen energy carrier, contributing to the increased use of renewable energy.

Now, the Japanese Government is actively promoting the use of hydrogen energy. In its Strategic Road Map for Hydrogen and Fuel Cells, compiled in 2014, it is clearly stated that, the technology demonstration of storage and transportation of hydrogen from overseas shall be done by 2020, full-fledged introduction of hydrogen power generation shall be realized by 2030, and full-fledged operation of manufacturing, transportation and storage of zero-emission hydrogen for domestic use shall be materialized by 2040. Chiyoda aims to establish a global hydrogen supply chain, to supply SPERA Hydrogen® for power generation, as well as distributed power generation energy supply businesses. 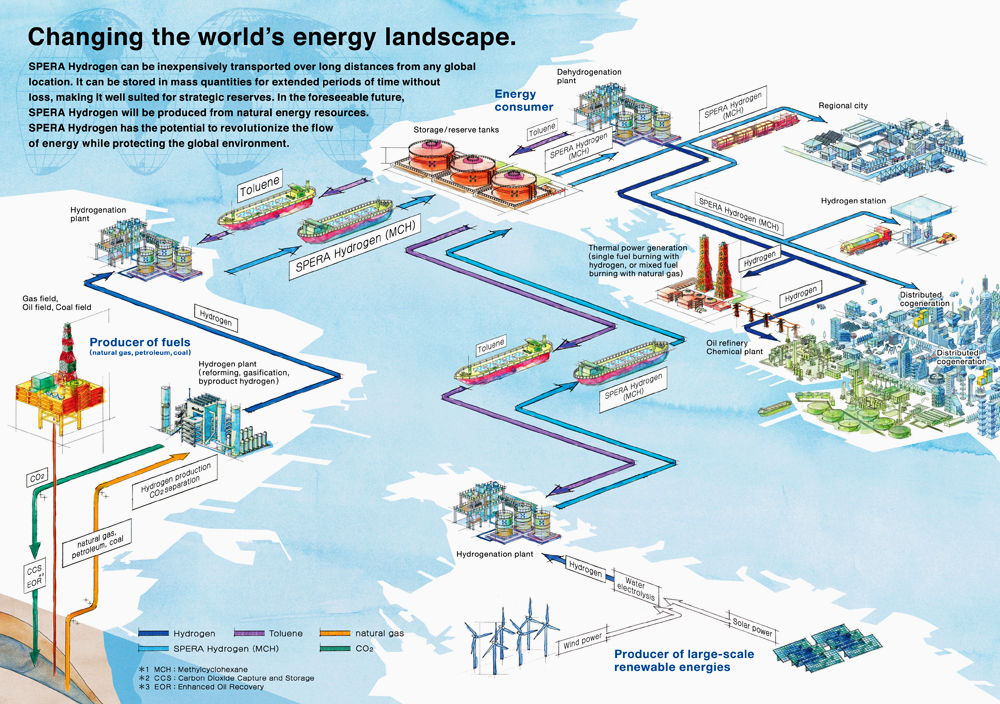 Arranged based on The Strategic Roadmap for Hydrogen and Fuel Cells published, 2016, by Ministry of Economy, Trade and Industry.

Performance of 10,000 hours of operation in Chiyoda’s demo plant