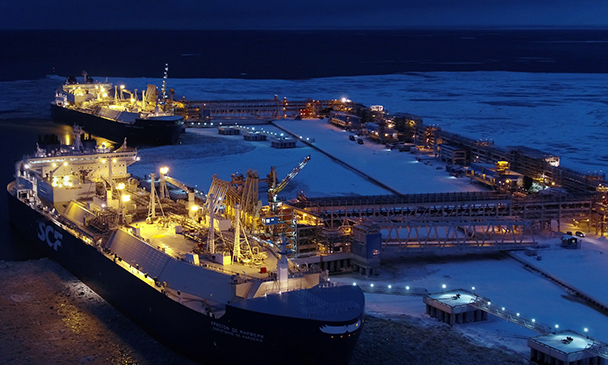 In 2014, Yamal LNG Project commenced in Sabetta located on the northeast corner of the Yamal Peninsula, Russia, aiming to effectively utilize a huge natural gas field in the Arctic Area off the coast of the Yamal Peninsula. The project owner is a Russian joint venture, JSC Yamal LNG, consisting of NOVATEC (50.1%), Total S.A. (20%), CNPC (20%), and SRF (9.5%). With the experienced of designing and constructing the first Russian LNG plant in Sakhalin Island, Chiyoda Corporation formed a joint venture with TechnipFMC, France, and JGC Corporation, Japan, and participated in the Yamal LNG Project as an EPC Contractor.

The word “Yamal” means “the end of the earth” in their indigenous language. In the winter season, the temperature reaches as low as -50°C, and no one can see the sun from November to February. Yamal is located in a severe cold area. To lead the Yamal LNG Project consisting of three LNG trains with a total of 16.5 million tons of production per year to success, the Japan- French joint venture (JV) actively took on challenges in collaboration with its client, JSC Yamal LNG.

As both Total S.A., the technical leader at JSC Yamal, and TechnipFMC, the JV leader, have their headquarters in La Défense, a suburb of Paris, the JV established its Project Directorate in La Défense, executing Yamal LNG Project in close communication with its client.
For smooth project operations and the success of the project, Chiyoda assigned key personnel such as Project Director, Technical Manager, Project Control Manager, and those in charge of construction, legal, and finance to the Project Directorate in Paris.

Throughout the whole project execution period, the Project Directorate was able to keep close communication with the client, vendors and subcontractors, and acted as an engine to lead the Yamal LNG Project to success.

To minimize construction work in the Yamal Peninsula under harsh climatic conditions, the JV entirely adopted a module construction method. The JV divided this huge LNG plant into approximately 150 modules and ordered ten module yards in Asian countries to construct these modules, and all ten module yards tried to complete their construction work in parallel in the shortest period of time.
Being mainly in charge of the design and construction of utility facilities, Chiyoda managed a module yard located in Tianjin, China, with the mission to construct a total of 18 utility and control room modules and deliver them to Sabetta in the Yamal Peninsula on schedule.

In August, 2015, an explosion occurred at chemical warehouses in the Tianjin port zone and caused a major fire. BOMESC’s module yard, which engaged in the construction of several modules under our instructions, was also badly shaken. In compliance with instructions from the authorities which were concerned about air pollution caused by micro particles and poisoned gas, Chiyoda and BOMESC tentatively suspended their work and evacuated. Fortunately, all workers in the BOMESC yard were safe, and they worked so hard after the restart of module construction work and managed to complete their work on schedule.
This came from the hard work of one team consisting of Chinese, Japanese, French, and Russian. The slogan of our team was “Always Take on Challenges! Make it happen!” 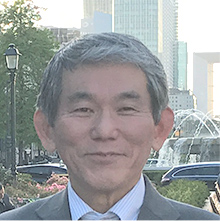 “At the initial phase of the project, we faced some difficulties such as synchronized terrorist attacks in Paris, economic sanctions imposed by the United States, and the huge disaster in Tianjin. The JV overcame such difficulties, established closer and reliable internal relationship, and communicated with each other with respectful mind. Such approach led the project to success. In particular, remarkable foreseeability and leadership of Mr. Jean-Marc Aubry, Project Sponsor of TechnipFMC, and good communication among the managements of the three companies stationed in the Project Directorate in Paris were the driving force that brought the entire project together as well as the module construction.”

Transportation to the Yamal Peninsula

The first route has an advantage in distance, however in the winter season, it is not available due to the frozen Arctic Circle. the JV planned the most efficient transportation plan, where the first route is mainly taken in the summer and the second route is taken in the winter respectively.
Then, the JV managed to safely deliver all modules from the module yards in China to the Yamal Peninsula on schedule.

Mr. H. Fujihara says;
“The first module arrived in Sabetta was constructed by a UK vendor at its Spanish yard, which was managed by Chiyoda. I think this achievement was brought about through the quite good coordination of the Spanish yard by Chiyoda engineers staying there for relatively a long period of time and full support from the Project Directorate in Paris in collaboration with specialists of quality assurance and schedule control. I was so impressed by the news that the module coordinated by Chiyoda firstly arrived at Sabetta. Fundamental factor of the project success was in the activities of the JV module yard teams which effectively managed ten module yards in parallel, enabling the JV to deliver all modules to the Sabetta site on schedule. All project members are proud of the fact that this achievement resulted in ample construction schedule at the Sabetta site.” 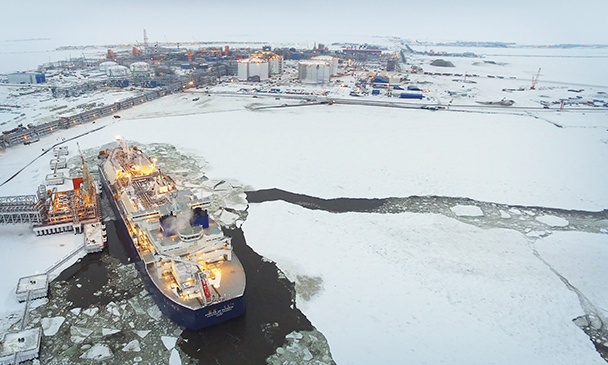 It was so difficult task to install all the modules smoothly awaiting delivery from Asian module yards. Average annual temperature is -10°C and the lowest temperature reaches -50°C in Sabetta. The JV was forced to effectively mobilize workers wearing thick snowsuits and to complete the construction work in the shortest possible time. Majority of the construction workers mobilized by the Russian constructors were from Central Asia, who had similar appearance features to the Japanese. They were proud of participating in this national project and diligently and safely carried out construction work under the harsh climatic conditions. As a result, Yamal LNG Project was successfully completed earlier than scheduled.

Although Chiyoda has accomplished LNG projects in the Middle East countries, Sakhalin Island in Russia, Indonesia, Papua New Guinea, Australia, the United States, and Africa, the Sabetta construction site was under the severest conditions Chiyoda had ever faced.

There were many challenges the JV had to overcome, such as management of ten module yards in different Asian countries, module construction with quality and safety, transportation from the yards in Asia to the Yamal Peninsula, and the severe conditions at the construction site. However, through close communication with the client, the JV yard team effectively led the module yards, determined construction workers devoted themselves, and the French-Japanese JV properly managed the entire project as one team. Such endeavors led this difficult project to success.

“We overcame extremely severe climatic and site conditions in the Arctic Circle and completed the project earlier than scheduled, and stable plant operations has been achieved by the client. I am assured that this is an unprecedented success.
At the time of the conclusion of the EPC contract, it was assumed that the required project completion schedule was not achievable and a delay of at least one year might be unavoidable. However, the final third train was completed ten months earlier than the client’s target schedule. President Mr. Putin and Prime Minister Mr. Medvedev visited Sabetta for the first and the third train LNG shipping ceremony respectively. The project team of the client and the JV also gained a great honor.

Achieving client satisfaction is the final task of the project team members and also their pleasure. I have come to realize once again that the key to the success of a project is to establish a system where clients, EPC contractors, construction contractors, and vendors work together as a team to tackle all challenges.
I greatly appreciate all those involved in the project.”